Join us for a great SUP Holiday! There’ve been lots of surf camps, but this is the first ever camping of international Stand Up Paddlers. We are giving daily SUP lessons from virgin beaches on the island of Euboea, which is the second-largest Greek island. The ground is 10km away from Aidipsos, famous for its 20,000 years old spas (hot springs near the beach). This is a remote area tucked away from urban influences and offers beautiful untouched nature.

Pascal‘s friends Yannik and Johannes have been developing off-grid living there for nearly two years now. (Before that Yannik was pizza chef in his own vegan restaurant in Mainz. Johannes is originally from Sweden.) Both of them are now growing and storing their own vegetables, building wooden houses, pumping water from a well, only on solar power and from a generator. Nevertheless the food from their gardens, and what they share with their neighbours is more than tasty. The Internet connection is better than in crowded cities. Life turned out to be very peaceful – ideally matching the minimalistic approach of Stand Up Paddling to explore nature.

May’s the best time of the year in Greece for SUP when you would still need wetsuits in Germany. In Greece you just wear T-shirts at this time of the year. It’s summer feeling like it will be in Mainz in July/August, not too hot, the perfect opportunity to start the bikini season from there.

Your SUP trainers will be Pascal and Alicia. Pascal started SUP as early as 2015 in Carbis Bay at the Atlantic. Alicia works as a trainer since 2021. We will do tours of about 10km to access hidden beaches, teach advanced skills as in our master classes, and even show you how to dance on a SUP.

Johannes and Yannik, as well as two other friends will entertain you the rest of the day. Some of the ideas are: Bachata dancing, a building workshop, yoga, jamming, Kung Fu, meditation, sitting in hot springs, a Cacao Ceremony, visiting a totally untouched forest on a nearby mountain, bread on a stick and playing volleyball at the beach, and a cooking class. Do you have any cool skills that you’d like to share with the rest of the group? 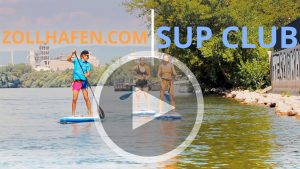